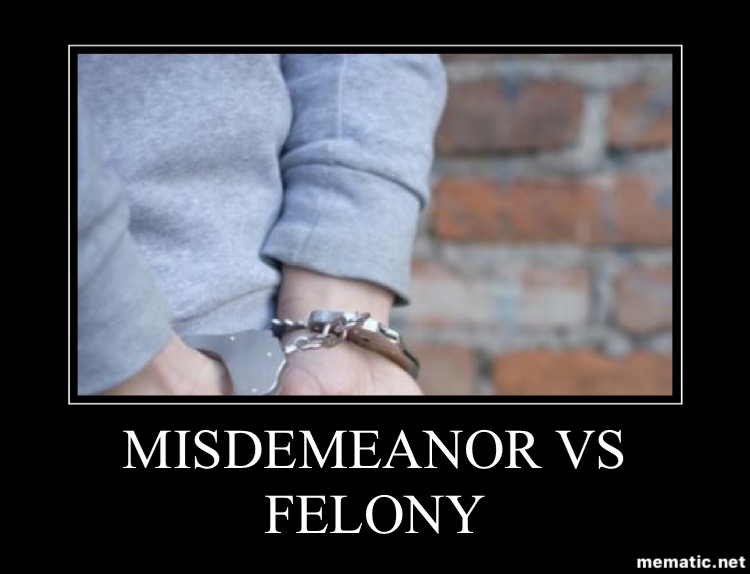 What’s the Difference Between a Misdemeanor and a Felony in Oklahoma?

In Oklahoma, when a person is charged with a serious crime, it will either be categorized as a misdemeanor or a felony. So, what is the difference, and what effect can that have on the outcome of the case?

Oklahoma criminal statutes define a crime as any “…. act or omission prohibited by the law which, upon conviction, is punishable by fine, imprisonment, removal from office, disqualification to hold office, or death”.

The difference between an offense being filed as a misdemeanor or a felony can be huge, both in the amount of potential jail time, and the amount of fines and costs that may be imposed as punishment.

Is it a Misdemeanor or Felony?

By Oklahoma law, some crimes are misdemeanors, and some crimes are felonies. Sometimes the nature of the offense itself will dictate whether the crime is classified a felony or misdemeanor. For instance, theft of property can be considered a felony or a misdemeanor, depending on the facts of the case. For example, Oklahoma statute Title 21, Chapter 68, Section 1704 defines a theft as felony Grand larceny in either of the following cases:
1. When the property taken is of value exceeding One Thousand Dollars ($1,000.00).
2. When such property, although not of value exceeding One Thousand Dollars ($1,000.00), is taken from the person of another. Larceny in other cases is petit larceny (a misdemeanor).

How a case is filed, whether as a misdemeanor or a felony, is determined by the District Attorney based on the evidence available at the time.

Misdemeanors generally carry less severe penalties than felonies. In Oklahoma, a misdemeanor is an offense that is punishable by no more than 1 year in a county jail.

Felonies can be much more serious. Oklahoma law states, “A felony is a crime which is, or may be, punishable with death, or by imprisonment in the penitentiary”. Typically, a felony in Oklahoma is one that is punishable by 1 year or more in state prison.

Felonies generally have more severe consequences than misdemeanors, including the loss of certain civil rights. A person convicted of a felony will lose the right to use, own or possess a firearm (can be true with some misdemeanors as well), the right to sit on a jury, and the right to vote (for a time). In addition, a convicted felon can face severe employment consequences. Many employers will not hire or allow a felon to continue in their employment. Likewise, they can be prohibited from holding a position that involves the handling of money or getting licensed in any type of profession. Housing options can also be limited by a felony record.

In addition, some crimes are considered “enhanceable”. That means that a second offense of a crime you’ve been convicted of in the past can be considered a felony. For instance, a person’s first conviction of a DUI in Oklahoma is usually a misdemeanor, but a second or subsequent conviction for DUI within a ten-year period may be classified a Felony.

There is another difference between a felony and a misdemeanor conviction. A misdemeanor can be easier to get expunged. An expungement is the court-ordered process in which the legal record of an arrest or a criminal conviction is “sealed,” or erased in the eyes of the law.

Most criminal cases will require that a defendant have an attorney to represent them with the District Attorney and the court. The information contained in this article is intended to be a general guideline concerning the difference between misdemeanors and felonies. If you have been charged with a crime, it is very important that you speak with an attorney about your particular case. Most attorneys offer a free, no-obligation consultation.

Rodney’s Bail Bonds is not a law firm, we are bail bondsmen. We are not attorneys, and this article is not to be considered legal advise nor a substitute for legal advise from a lawyer.

If you are in Central Oklahoma and looking for information about bail bonds, go to www.RodneyOKCBailBonds.com or simply use this link to get answers to the most asked questions we get.  We will be happy to help you get the answers you are looking for. Rodney’s Bail Bonds is available 24 hours a day, 7 days a week. When the unexpected happens, call Rodney at 405-205-0603.